I’ve mentioned my plans for this project during the IoT hangout session few months ago, it has finally materialized as working prototype. The blocker so far was the lack of ESP8266 RFM69 driver and free time on my end, so I’ve teamed up with Andrey Balarev to solve this. Andrey is an IoT enthusiast + embedded systems developer and has done excellent job in porting LowPowerLab’s RFM69 library for the ESP8266. He spent few weekends staring at the oscilloscope, re-writing SPI library code and managed to solve a number of challenges to get this library going. I’ve bundled his driver code with MQTT to get a beautifully working prototype that forwards RFM69 traffic to MQTT and vice versa. Few screenshots of the setup: 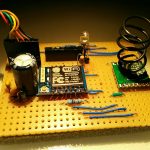 The prototype on veroboard 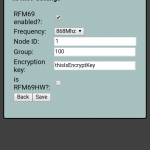 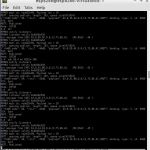 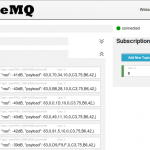 Some folks probably ask why the RFM69 and not RFM12B and why LowPoweLab’s library and not Jeelib, I’ve outlined my view on that before here. Basically with Jeelib we are forcing the RFM69 in artificial compatible mode and not taking fill advantage of the chip.

What I plan to add as functionality is payload serialization configuration, payload field name configuration and RPN based signal processing configuration so that JSON could be constructed/deconstructed from payloads in both directions.

It will be a replacement for the RFM2Pi project, a much more advanced standalone M2M gateway for the IoT.

I’ll build few PCBs and put some for sale in my shop as well. RFM69 library code will be shared at that point.