Artificial Intelligence is quickly becoming an important ingredient for IoT projects’ success, a requirement for unlocking its full potential and providing a competitive edge to those that embrace it. AI naturally integrates into existing connected sensor/actuator networks and immediately adds measurable value. It was hard to imagine until recently, that AI will be so easily accessible, with just a few libraries installed we can take benefit of this amazing technology.

Let me illustrate with a simple example – enhancing ordinary IP security cameras with AI. The goal is that the cameras will recognize the objects they see and publish the recognized object’s data to an MQTT topic. I am interested in the detected object’s type, location within the captured frame and recognition confidence level. The applications I am considering are:

The project relies on image classification with deep convolutional neural networks using the darkflow library. Setting up darkflow is pretty trivial, simply follow the instructions in the repository. I used Python, basically, it starts an FFmpeg background process that captures a single frame from the RTSP stream every 5 seconds and passes it to darkflow for analysis. The analysis results are then published to an MQTT topic, and as an option, a screenshot of the detected objects is taken.

The reason why I used FFmpeg rather than OpenCV to capture the RTSP frames is that OpenCV implements RTSP over TCP by default. My specific camera model only provides RTSP over UDP. I tried to recompile with UDP support, but could not get it to work reliably. I use a RAM drive to avoid excessive writes on my SSD. Ideally, this setup will run on a Raspberry Pi 3 B+, I have one in order.

My code is available here for you to try out. 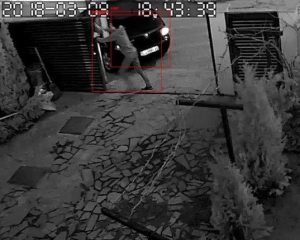 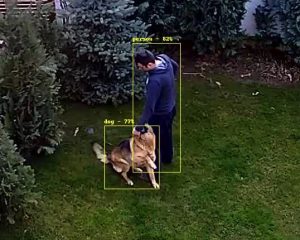 Me and my dog detected

24 thoughts on “Enhancing my ordinary IP security cameras with AI”